In the 1800's, American usage of the word "gymnastics" seems to be the all-inclusive word for the early physical training that went on in this country. There are a number of terms used in the late 1800's and early 1900's to define physical training - since there wasn't much in the line of Physical Education in the schools.

Some of the terms include:
Light Gymnastics - which refers to the use of dumbbells, wands and clubs.
Heavy Gymnastics – which was the sport of men’s training with the bigger apparatus.
Physical Culture, again, this word seems to be interchangeable with what we consider today's physical education.
Calisthenics: stretching and static movements. It is interesting trying to sort it all out. Usually, the term gymnastics included a combination light and heavy gymnastics, with calisthenics, military drills, running, some track events, and game playing. 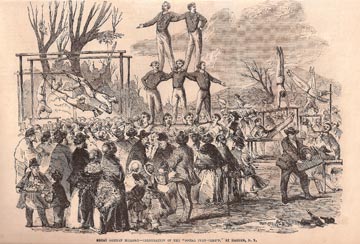 Turnvereins were German Gymnastics Societies that were first formed in Germany during the early 1800's. They were a sports and political organization. (Newspaper image at left: A German Turnverein, Harlem, New York, 1856)

When members of the Turnverein fled Europe to escape political persecution, they became instrumental in the establishment of gymnastics in the US and Turnvereins were eventually started in different parts of America. In these tumultuous times in early 1800's Germany, three followers of Friedrich Ludwig Jahn (1778-1852; The Father of the Turnverein) escaped political persecution in Germany and came to the US. They were Dr. Charles Beck, Dr. Charles Follen and Francis Leiber.

One problem these men encountered in America was there was not the great connection between politics and physical training that they experienced in Germany. In their subsequent work in starting German gymnastics here - it became merely a fad.

Charles Beck (1798-1866) was instrumental in introducing gymnastics as an educational program in Northampton, Massachusetts in 1825 at the Round Hill School. This marked the beginning of the German influence of gymnastics in this country. (But, again, "gymnastics" also included the playing of such games as baseball, hockey and football.) He left Round Hill in 1830 to go to another academy, and he eventually ended up at Harvard as a teacher of literature and he gave up physical education. The Round Hill School closed in 1834 for financial reasons.

Charles Follen (1796-1840) founded the second American gymnasium and also introduced German gymnastics at Harvard University in 1826. He originally was hired at Harvard to teach German. Can you imagine the students, directed by Follen, out on a piece of ground called the Delta, putting together some wood and iron to make bars, ladders and horses, and hanging climbing ropes. How new, weird, and exciting it must have seemed to them. They also had places for running and jumping. "It was a German Turnplatz transplanted to America." (1) He is noted for starting the first college gymnasium in America.

Francis Leiber (1800-1872) was the third pioneer and he took over Boston's gymnastics in 1827 when Follen quit. In the early 1830's, the novelty of gymnastics wore off in Boston.

THE DECLINE AND COMEBACK

"Gymnastics" was losing it's fancy in America and even Leiber couldn't keep the interest in gymnastics alive, except in the military schools. Some secondary schools and colleges had started programs but by the 1830's interest in physical education didn't hold. Gymnastics came back to America in about 1848 when there was a large influx of German refugees and by 1850 Turner societies were established and helped further the use of gymnastics in school programs.

After the Civil War, gymnastics as a competitive sport began to develop in various gymnastic clubs and societies.

Certain educators and doctors tried hard to push the notion of Physical Education in the schools and finally in the 1850's-60's, programs were started. The Normal College for training teachers in gymnastics (Physical Education) and in schools and clubs was established in 1865. (More on this later.)

As for women, in 1828 Catherine Beecher founded the Hartford Female Seminary in Connecticut, which stressed the physical, intellectual and moral education of women. The physical aspect in the school was a system of calisthenics. Two years later, she moved and opened a similar school in Cincinnati, Ohio.(1)

During the mid-century (1800's), immigrating Czechs and other Slavs were forming Sokol Societies in the US, promoting physical fitness and power using German apparatus. They also contributed to the development of competitive gymnastics in this country.

In the latter part of the 19th century, Swiss societies were established which also used German apparatus.The Swiss American Gymnastics Association or Swiss Turn Verein also had a great affect on American gymnastics.

The YMCA, (Young Men's Christian Association) founded in Boston in 1850, also played a large role in the development of gymnastics in the United States. YMCA built gymnasiums in San Francisco and New York in 1869. The YMCA College in Springfield, Massachusetts was formed in 1887 to provide students with knowledge and skills in teaching gymnastics and other sports. 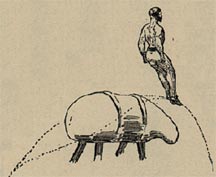 Dio Lewis, in the late 1800’s, became the principal of the Lexington Seminary for girls. He was principal of the Normal Institute for Physical Education, and the author of Weak Lungs and How To Make Them Strong, and The New Gymnastics, which he wrote in 1867. He had a theory of free play that required little supervision, which was a widely accepted educational philosophy.

As far as this author can see, in his book The New Gymnastics, he was pushing what we call "calisthenics" today. He decried "violent" gymnastics, which supposedly caused great harm to men in later life. This system of "gymnastics" did harm to the gymnastics movement as it was before he got this system into the schools. Interesting that they called this gymnastics. But he did have a great influence in getting a type of Physical Education into the schools.

OTHER INFLUENCES ON AMERICAN GYMNASTICS

Dudley A.Sargent: (1840-1924), greatly influenced the advancement of gymnastics and the program at Harvard University. In 1881 the Sargent School was established.

The first US gymnastic team to compete at an international level - a championship held in Frankfurt, Germany - was the Milwaukee Turners team.

The AAU: In 1885 AAU Gymnastic Championship Meets were initiated. This meet included such events as flying rings, high bar, Indian clubs, parallel bars and tumbling. In 1897, the AAU assumed national control of gymnastic competition in the US. By the late 1800's many colleges were equipped with gymnasiums and had installed gymnastic apparatus.

In education in the late 1800's and early 1900's, it seems that the words gymnastics, physical education, and physical culture were all interchangeable. For example, one book titled "One Hundred and Fifty Gymnastics Games" compiled by the Boston Normal School of Gymnastics Alumni in 1908, is merely a book on Physical Education games.

Baron Nils Posse: Originally from Sweden, he became the Director of the Posse Gymnasium in Boston. He wrote the 1890 book Special Kinesiology of Educational Gymnastics. Posse died in December of 1895 and his wife took over the gym. In the early 1900’s there was the Posse-Nissen College Swedish Gymnastics University in Maine. Both Nissen and Posse were early gymnastics leaders and wrote books in the late 1800’s.

In the early 1900's high schools were getting gymnastics equipment. Following World War I, the number of grade schools installing equipment grew. During the depression of the 1930's all gymnastics was curtailed. At the end of World War II, the AAU resumed gymnastic programs and interest grew rapidly.

However! There were three main influences in American public schools and colleges, which impeded the use of apparatus:
1. Dio Lewis introduced exercise that did not require apparatus and schools accepted his program enthusiastically.
2. The Swedish influence of about 1900 emphasized calisthenics.
3. A trend toward more recreational activities about 1920 after WW1. (2)

For the first three decades of the 1900’s, the YMCA, and exhibition teams in different parts of the country promoted interest in gymnastics. High schools started programs and the development of competitive gymnastics grew.

Starting in 1920 and continuing until about 1950 school gymnastics programs began to decrease, and Turnvereins and Sokol Clubs shut their doors. YMCA started to drop their programs.

World Wars I and II had negative effects on gymnastics throughout the country. Many men, who were our coaches and college gymnasts at the time, joined the service. An example of this can be seen with our own Eric Hughes and his college coach.They both went into the service, and returned to the college after WWII.

During WWII the US Navy established the Naval Aviation Physical Training Program for the purpose of getting American service men into shape! Four of that era's great gymnasts/coaches were involved in that program, and a book was published detailing the program. At the end of the war, officers who had conducted the programs returned to civilian life and many got jobs as coaches and directors of physical education. "A new impetus was ...given to the development of gymnastics, and regional and national associations" carried on the "progress attained during the war years."(2) (One of those men was Joe Giallombardo who taught this author how to tumble in the 1970's. Unfortunately, I didn't have a clue who he was, and I didn't find out until recently that he was one of America’s greatest tumblers. - Lee)

Following WWII, gymnastics began to grow again. During the lean years, "gymnastics was kept alive by the unselfish and untiring work of dedicated leaders." (5) Men such as Leslie Judd and Dr. Hartley Price presented gymnastics demonstrations with their teams. In the late 1940's, Eric Hughes traveled the US and Canada with an exhibition troop, and WSU's Hubie Dunn started traveling around Washington State with his teams.

Roy Moore did a lot to revitalize the sport. The National Gymnastics Clinic, started in 1951 in Sarasota, Florida, caused many other areas of the country to start their own clinics that the gymnasts, both girls and boys, and their coaches and parents attended for instruction. Many gymnastics camps were begun.

USA Gymnastics, formally known as USGF, was established in Tucson, Arizona in 1963. It is the umbrella organization for men’s, women's, rhythmic gymnastics and trampoline in the US today.

The Modern Gymnast magazine was started in 1956.