George Lewis was born in Helena, Montana (or Northfield, Illinois) in 1920 and moved with his family (parents, and a brother and sister) to the Ravenna area in Seattle. They lived about two blocks from the Green Lake Field House where George participated in the tumbling program under Coach Dusek. At the age of ten or eleven, he had a paper route. He was also fond of fishing, which he did as a youth (going to Ballad to put in his pole - possibly learned from The Boy Scouts).

He attended Roosevelt High School and was pleased to be on the tumbling and gymnastic team which met at 7:30 in the mornings every day under the coaching of Sheridan (Sherry) Bertiaume. Mr. Bertiaume had been at the Seattle YMCA as a physical education director from 1914-1916. When Roosevelt opened in 1922, Mr. Bertiaume moved to the school as a physical education teacher and boys' counselor. George's brother Harry also participated in this program four years later. George graduated from high school in 1939 and worked for about 6 months with the CCC Camp at Waskowitz near North Bend. 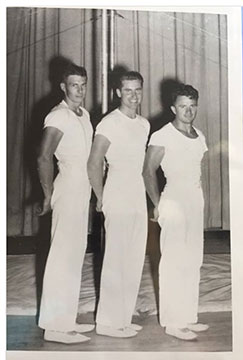 George was also fond of and skilled in diving. He competed both for the YMCA and Roosevelt High School on the swim team. While at Green Lake Fieldhouse he participated in tumbling and gymnastics. He began volunteer work at the Seattle YMCA from 1939-42. Meanwhile he worked as a machinist at Keyport Torpedo Company. He commuted every day from Seattle. He couldn't be drafted because of this war essential job. In 1939 he was being groomed by the YMCA to be an Olympic competitor in diving. But due, of course, to the war, the Games were suspended in 1940 and 1944.

In 1940 he brought the first trampoline to the west coast in order to aid in the teaching of tumbling skills. Before this only the springboard was available as a teaching tool.

In 1945 he was drafted into the army and was sent to Japan shortly after the war armistice. He made his own trampoline for his fellow army mates as a diversion and sports outlet. (He was almost court martialed for taking the supplies for the trampoline from the army depot but an officer who had been a gymnast from Michigan dropped the charges.)

When he returned from the army he didn't want to be a machinist so he decided to go into watchmaking. He learned watchmaking as an apprentice at The Time Shop and had some training at The Bridge Jewelers. He earned one of the two highest degrees in watchmaking. He retained his business for a long time and then became an instructor at Edison Technical School and eventually went to North Seattle Community College as an instructor. A sun dial was placed on that campus to commemorate his work there. (Sculpted by Daryl Smith, erected in 1992, the dial is a memorial to George, who was the founder of the College's Horology Department, now succeeded by the Watch Technology Institute.)

He also went back to the "Y" where he trained himself and hoped to interest other men, including another local Tommy Thorson, in working on the gymnastics apparatus. Since he always enjoyed teaching others, he had classes for young people. The first competitive open meet after the war was in 1947 and was conducted by George Lewis.

In 1950 Eric Hughes brought one of his students, Rudy Peterson, to compete at a gymnastic meet at the "Y" and that is where these two met. Thereafter they did hand balancing together and performed at shows in order to further interest in the sport. Eric had a children's programs but he was only able to accommodate boys at his UW facility. When he got calls to teach girls, Eric referred them to George Lewis at the downtown "Y". Thus George started with the girls programs. The first of these girls was Patsy Walkup beginning in about 1957 and 1958. Also included were the Suver girls, Ann Berger along with Terry Hildebrand, Frank Gato, Ken Lombardo, and Dale Shirley. This group of people would train at the Seattle Y on Wednesdays and apparently would also go to the UW gym. Dale McClements began in 1959 as a student at Highline High School. She went to Gym Kamp that summer and then to the "Y" with George and often to California with Bud Marquette.

In 1962 the Nationals were held in Seattle in conjunction with the World's Fair and Dale won the all-around. That meet was a trial for the upcoming World Games in Czechoslovakia that coming summer. Dale was a member of that team and George was a coach. Later more girls were attracted to the sport and began competing. George took these girls, as they became more skilled, to AAU, YMCA, National and Canadian championship meets. George Lewis would call George Gulak, who was National chairman of AAU gymnastics, and find out where the meets were held and how to obtain entry forms. Thus, these girls had the opportunity to attend meets around the country and Canada. Some top name girls came to Seattle in order to train with George. (Including Avis Tieber Jamieson and Doris Fuchs Brause.) Many Seattle girls were offered scholarships to attend colleges. The program at the Seattle "Y" attracted many high school Physical Education teachers. George gave workshops and hosted invitational meets that helped many gymnasts. 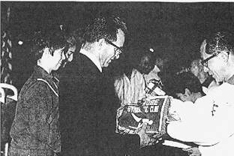 George was married to Pat Wamer in 1950. They had met at the Green Lake Fieldhouse and were introduced by none other than Julius Boehm who wanted to get them together through the sport of tennis. They later adopted their son, Carl who also became a watchmaker.

George had other interests besides gymnastics and watchmaking. These included skiing and hiking into the mountains to restock fish in the higher lakes. He took several of the gymnasts on these hikes as well as having them work in his Time Shop in downtown Seattle, thereby letting them see another side of his nature in sharing his talents with them.

Enough can't be said for this man who gave so willingly of his time to share his love of gymnastics and expertise to those who came after and who benefited so highly. George died in 1987.

Read more about George at http://www.usghof.org/files/bio/g_lewis/g_lewis.html