In 1958 The Highline School District initiated a summer gymnastic program; the idea was that of Ev Woodward, coach of the Highline team and its purpose was, "To give boys and girls who are interested in gymnastics activities a chance to participate in a concentrated program under the guidance of leaders in the field". Highline's Gym Kamp, then an annual event, was held at Camp Waskowitz near North Bend. It was owned by The Highline School District and was a 160-acre site, which was used primarily by the district as an outdoor education facility for 6th graders. Jack Mackenroth was the Camp Director and Eric Hughes was the Program Director. 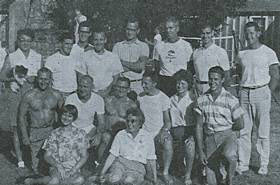 For a number of years Mackenroth continued to serve as Camp Director and Ev Woodward as Program Director. Boys and girls from 8 years of age through high school ages were included. Equipment was transported from Highline and other schools. The challenge was moving it out 34 miles east of Seattle, setting it up in trees, deciding where every apparatus should be placed, and then trying to keep it dry if it should rain! It must have been a good recipe because for the next 30 years this proved to be the longest continuous gymnastic camp in the United States. Many fond memories belong to all who were privileged to be participants.

Other leaders the first summer, besides the three initiators, included Bob Sarver and Patsy Walkup. The following year, 1959, the "new" leaders were Bud Marquette, Dale Shirley and Mary Sarver. (Bud Marquette learned gymnastics at American Turners in Pennsylvania and then had a team in Slippery Rock, CT. and Western PA. Graduated in 1937. Spent 10 years coaching boys then started coaching girls in 1942. Built first unevens in 1952, and moved to California after the 1956 Olympic Games. Bud came to Gym Kamp for 12 years. He coached Cathy Rigby and founded the California "Scats" team.)

They all became members as alumni of the year they began. The barracks were labeled A,B,C,D. All campers were aroused by "The Bell" for dining and flag raising, for "tang" breaks, for camp fires by the river, for 4th of July fireworks, for watching the Olympics around the sole TV in camp, (in consonance with the bugs, that bit us all as we watched from outside), for the competitions and shows for the parents on the last day of camp-we all say "yes, fun!". Students were put into classes according to their level of ability and all would rotate to another station to work another part of the body. Events included dance, swimming and diving, trampoline, tumbling, vault, high bar and still rings in the trees, uneven bars in the Quonset hut, free exercise under the tent, beam down by the river, and on free time hiking across the river up to "Bear Camp".

When the hands got too sore, for a change of pace, we climbed Mt. Si. As highlights, a gymnastic team from New Zealand stopped by as well as a rhythmic gym group from Sweden (girls).

Julius Boehm, a local Swiss gentleman who had been a torchbearer in the 1932 Olympics came to give inspirational talks around the campfire as well as bring candy from his famous candy kitchens.

Directors down the span of time were Jerry Thomton, Noel Nelson, Don and Billie Dorland, Bob and Mary Sarver, and Laurie McShane Fleehart, who had originally been a high school team member at Highline. In the first years, there were boys and girls together but gradually it became a camp for girls only. There were one-week sessions and two back-to-back sessions usually in early July. Sometimes the mats were so hot they couldn't be stepped on. Sometimes it was so rainy and muddy that we used all the towels to "dry things up".

Many times we had to push the tent tops with large brooms so the weight of the rain water wouldn't break the canvas. But most of the time it was great fun, making new friends, learning new gymnastic skills, and singing songs by the camp site and in the dining room.

We also had several future Olympians in our midst - Dale McClements Kephart, JoyceTanac Schroeder, Cathy Rigby McCoy, Carolyn Pingatore Holmes and Coach Bud Marquette. Bud brought a carload of girls from San Diego for 12 years to participate in the camp. Eric Hughes eventually got the UW to grant college credit for the gymnastic instruction as well as counseling - for supervising in the barracks. Jim Sullivan held the record for the longest stint of returning to camp-as an instructor and program director. Many Washington coaches got help in learning gymnastic skills to further the number of Washington teams.

(The following is from the Highline Public Schools Website on Camp Waskowitz - 2011)
Camp Waskowitz was built by the Civilian Conservation Corp (CCC) in 1935 at its present location and was named Camp North Bend. After the CCC was disbanded, the Camp was sold and later renamed after Fritz Waskowitz from the Chicago area. Fritz Waskowitz had been a football player and captain at the University of Washington before he became a pilot in World War II, was shot down and killed. The facility was renamed in his honor. Highline School District began sending students to Waskowitz in 1947 and later bought the property in 1957.

Carl Jensen, then Superintendent of Highline School District, convinced the Highline High School student body to use funds raised for a new sports stadium to buy the property with a promise that the school district would reimburse their fund. Some time later, Superintendent Jensen and the Highline School District made additional purchases of surrounding land that increased the Camp Waskowitz acreage to its present 372 acres. Today, Camp Waskowitz is a State and National Historic Preservation site and is one of only two remaining CCC Camps in the United States with all of the original buildings still standing. Since the inception of the Outdoor Education program in 1947, over 200,000 students have experienced this school in the woods.